I have conducted human ecological study in Solomon Islands for long years, amongst in East Tasimboko ward. Until now, I have received the following 3 grants. 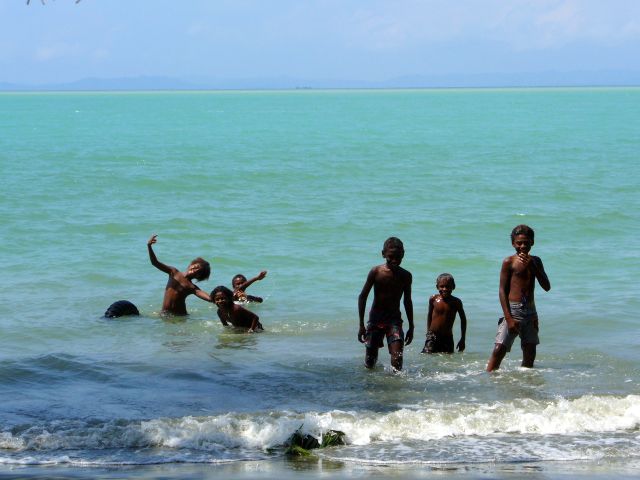 During 1980's and 90's, the East Tasimboko area of the Solomon Islands experienced rapid population growth and Westernization including frequent visit to Honiara (the capital, locates 50 km to the west of East Tasimboko) and increased dependency on purchased food, which required involvement to cash economy by introducing logging, poultry, cash crop production, and so on. There were three nearby clinics, where people easily obtained chloroquine and some other medicines so that mortality was decreasing. In the end of 1995, we have conducted a human ecological study including malaria active case detection, urinalysis, anthropometry, interviews and behavioral observation, and reported detailed situation there (by the 1st grant).

However, around 2000, the ethnic tension occurred in Guadalcanal Island, in which people fought between the two islands, Guadalcanal and Malaita. The tension changed everything. About 66% people lost their housings in East Tasimboko. People lost the transportation to Honiara due to the destruction of bridges and paved roads. Clinics were also broken so that availability of medicine was largely damaged.

The 2nd wave of research (by the 2nd grant) aimed to clarify the effect of the ethnic tension on the health and life of the East Tasimboko residents. In February and September 2006, we conducted interviews about the effect of the tension and psychological aftereffects in children, and the follow-up studies of November 1995, which included malaria active case detection, 24h dietary recall, urinalysis using dipstick (N-multistix SG-L; Siemens Healthcare Diagnostics, K.K., Tokyo), blood pressure and anthropometry. The intensive interview about social capital and QOL was also conducted.

The total population change was from 210 in November 1995 to 290 in September 2006. Mbambala area is made of 7 hamlets, which can be grouped into the two. In 4 hamlets, populations were naturally/socially increased, but in other 3 those unchanged or decreased due to move-out to other hamlets or high mortality probably caused by malaria. Urine diagnosis (urobilinogen, protein, occult blood, ketone body, and glucose) revealed overall improvement of health status. Considering the bimodal urine pH distribution in February 2006 and the fact that richer (and thus more obese) people suffered from more material effect, the change of health status can be judged as that some richer-obese people reduced energy intake due to the shortage of purchased food caused by the ethnic tension. However, in September 2006, urine pH distribution changed back to unimodal and most people took purchased staples more than once a day, the health status may be going to worse again. WHOQOL-BREF showed moderate level of QOL for the East Tasimboko people, except that the scores of environmental domain were relatively lower than other domains.

Immediately after the research in Sep. 2006, the transportation between East Tasimboko and Honiara has been re-established. It should make people's life drastically changed. However, the effect of the Ethnic Tension also might have remained, at least psychologically. The surveys of Sep. 2007 and Feb. 2008 were conducted to address this.

The life in the East Tasimboko is rapidly changing since Sep. 2006. Frequencies of going to Honiara were raised and cultivation of cash-crops like watermelon and shallot started. Some villagers started to store beer in their houses to sell them to other villagers. Frequency of eating purchased food may increased. The WHOQOL-BREF in Sep. 2007 and Feb. 2008 clarified the drastic increase in the scores of environmental domain, which may reflect the re-establishment of regular transportation to Honiara city. On the other hand, in Feb. 2008, the scores of social domain look decreasing. There is a possibility that psychological aftereffect of the Ethnic Tension has also disappeared. The prevalence of malaria seems to continuously decrease, amongst P. falciparum. Malaria positive individuals were not evenly distributed but converged into several households. The geographic/family effects should be further studied. Urine pH changed back to unimodal.

The 3rd wave of research (by the 3rd grant) aims to clarify the rapidly changing situation after the re-establishment of transportation between Honiara and East Tasimboko, as partly suggested from the result of the 2nd wave. We will try to check the effect of rapid urbanization on the health and lifestyles of East Tasimboko people.

How to cite this (in Japanese). Link to this page is completely free.